The success of Drake, BTS and Ariana Grande have helped the music industry earn its biggest revenues in a decade.

The music market is now worth £15bn, close to the level of 2006, says the IFPI, which represents the global music industry.

An explosion in streaming subscriptions has essentially saved the industry, which was in freefall for a decade. 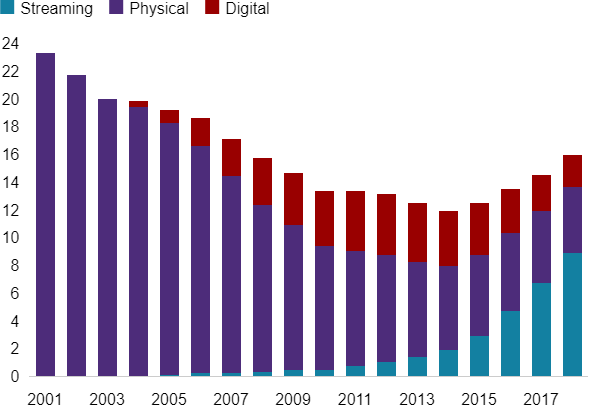 The likes of Spotify, Apple Music and Deezer now generate almost half (46%) of the industry’s total revenue. Their growth last year was enough to offset a 10% drop in sales of CDs and a 21% drop in digital downloads. However, the rise of streaming appears to be tailing off – with the 44.9% growth in subscribers down from 57.1% in 2017.

The IFPI has previously named Drake as the biggest recording artist of 2018, followed by BTS and Ed Sheeran.

The Greatest Showman was the best-selling album; while Camila Cabello’s Havana was the biggest global single of the year.

Overall revenue was up by 9.7% in 2018, marking the fourth consecutive year of growth.

The IFPI also revealed the vinyl revival continues globally, with sales up by 6%. The format now has a 3.6% share of the overall market.

Revealing the figures at a press conference in London, IFPI chief executive Frances Moore said: “In previous years this [event] used to be described as a ‘mourn-fest’ because we only had bad news. But four years starts to look like it’s a pattern, rather than just a one-off.”

She noted that Latin America, Asia and Australia had seen double-digit growth; but there was a slow-down in Europe, where revenues rose just 0.1%.

This was partly due to German music fans finally shedding their commitment to physical products like CD and vinyl. The country’s music revenues fell by almost 10%, making the UK Europe’s biggest music market for the first time in years.

“The potential and the vision is so much different because where you’ve got growth, you can invest. When the growth wasn’t there, it was a question of just getting by and keeping the industry going on a day-to-day basis.”