The Weeknd has received 16 nominations for this year’s Billboard Music Awards.

The 26-year-old is recognised in categories including top artist, top R&B artist and top male artist.

Fellow Canadian Justin Bieber has 11 nominations, while Taylor Swift and Adele have eight each.

David Bowie is nominated for Blackstar, his last album released before his death in January at the age of 69.

The ceremony, which will be hosted by Ludacris and Ciara, will take place in Las Vegas on 22 May.

They are the US equivalent of Britain’s Official Charts, and track the most popular songs and albums both overall and in different genres.

Many of the categories are based on these charts – such as top Billboard 200 artist and top Hot 100 song.

The Weeknd, whose real name is Abel Tesfaye, will effectively compete against himself in some of the categories this year.

Can’t Feel My Face and The Hills are both nominated for top Hot 100 song. They are also recognised in the top R&B song category alongside another of his hits, Earned It.

Elsewhere, Drake will compete against himself in the top rap album category with solo album If You’re Reading This It’s Too Late up against What A Time To Be Alive – his collaboration album with rapper Future.

Adele, whose last album 25 was became the fastest selling record of all time when it was released in November, is nominated for top artist and top female artist.

Her single Hello is up for top selling song and best radio song.

Adele is one of several British acts to receive nominations, with Ellie Goulding, Ed Sheeran, One Direction and of course David Bowie also being recognised.

Taylor Swift, who recently completed a world tour in support of her album 1989, is nominated for top touring artist.

This award is one of several categories which reflect the changing face of the music industry.

Taylor Swift swept the board at last year’s ceremony, winning eight of the 14 categories in which she was nominated.

Police made Lily Allen ‘feel like nuisance’ over stalker 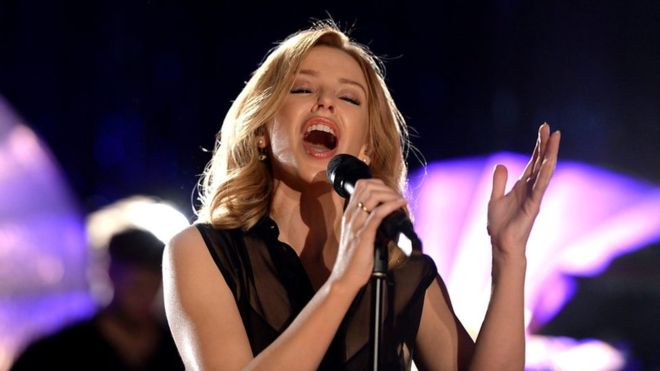