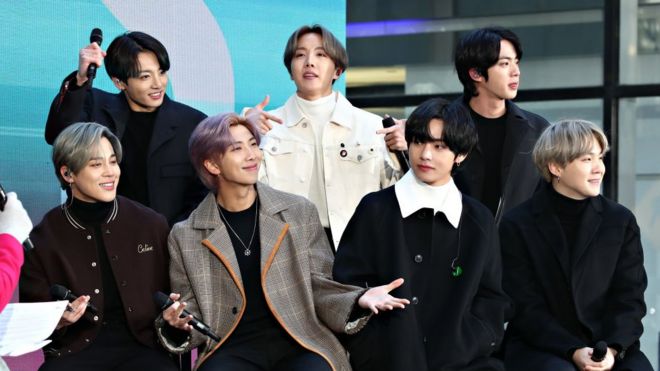 Members of BTS have said they were in “tears”, after becoming the first all-Korean pop act to top the Billboard 100 singles chart with their new English single “Dynamite”.

Jimin, one of seven members, said “tears kept coming”, adding in a tweet that he “didn’t know what to say”.

He also thanked their fans, known as ARMY, saying: “I’m out of my mind now but you guys made this [happen].”

Another member Suga simply posted a string of crying emojis.

Dynamite, their first song sung completely in English, reached 33.9 million US streams in its first week, to debut at number one on the Billboard Hot 100. Within minutes, the hashtag #BTS1onHot100 and #BTS_Dynamite began trending, with fans flooding the hashtags with congratulatory messages.

“No words, just tears,” said one fan on Twitter. “I can’t express how I’m feeling. Just so proud of you guys and how far you’ve come,” another said.

Many retweeted an interview with BTS, in which Suga had said he hoped to reach number one on the Billboard charts one day.

Even South Korea President Moon Jae-in weighed in, saying the boys had achieved a “splendid feat”. “After having topped the Billboard 200 main album chart four times, they have now reached No 1 on both charts,” said Mr Moon.

“The song Dynamite has been composed to give a message of comfort… it will bring consolation to Koreans suffering from the national crisis caused by Covid-19.”

The group said they wanted the song to convey “positive vibes, energy, hope, love, purity, everything”.